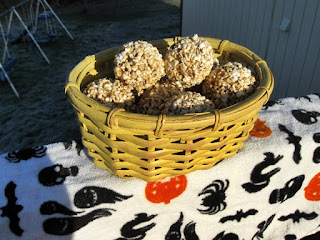 Well *ahem* I know that Halloween recipes MIGHT be sort of late coming since we have, what, like two days until All Hallow's Eve, but I suddenly had the thought that those with newly found corn allergies might want to curl into a ball in a corner, suck their thumb and hide when they discovered that Halloween is really HARD to work with when you can't do the corn thing.  Not that was my first instinct when I thought of Halloween and a corn allergy mind you...yeah not at all.

So, I thought I'd share some of the recipes I've come up with this year to help make Halloween special for one peanut, oat, and garlic allergic four year old (with coconut and corn sensitivities) and a corn allergic five year old at our house.  Some of these recipes will be corn free, some peanut free (since those are the two big allergies to contend with when it comes to Halloween treats) since my kids like different things, but they'll still taste good.  In some cases, like this one, the recipes will call for some specialty ingredients.  But, I figure, if you don't have these items in your house right now, you might want to buy them and make these recipes for other holidays (like Thanksgiving or Christmas to name a few).

The biggest obstacle I found to surmount in the making of most recipes (okay like 99.9% of them) was corn syrup.  That stuff is in everything.  The usual substitute is Lyle's Golden Syrup, which can be purchased through Amazon.com and might be available in some stores overseas, but I wanted to try to come up with something to sub that would be found in most kitchens and if you DIDN'T have it you could go to the store and GET those ingredients easily.  So, I came up with my own substitute for corn syrup in these recipes.  I hope it helps someone out there.

Today I rewrote the law on popcorn balls by taking out the corn...which wasn't easy with the combo of the...well popcorn...and the corn syrup that traditional recipes call for, but I did it :).  This recipe DOES call for butter.  If you can't do butter...you could try and substitute coconut oil, but I wouldn't do any type of buttery spread because the water ratio is going to be WAY different on a spread compared to an actual butter.

So, here you go folks.  "Popcorn balls" without the corn.  Enjoy some this holiday season! 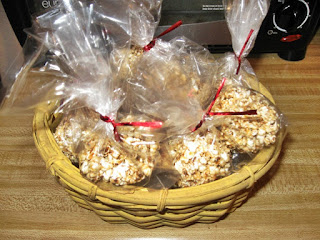 1.  Pop your sorghum.  Place 1/4 cup sorghum at a time in a large paper lunch bag and sprinkle with about 1 tsp of olive oil.  Fold paper bag over a couple of times and then place in your microwave until popping slows down (basically pop like regular popcorn).  You'll have to do this two times to get the sorghum completely popped, but you want to keep your portions low for popping or it just doesn't work (you'll end up with a LOT of un-popped kernels or very nasty smoking sorghum...trust me).

2.  Once sorghum is popped (you should have 4 cups popped sorghum when all is said and done), place in a well greased medium sized mixing bowl.

3.  Place maple syrup, honey and vinegar in a medium heavy bottomed saucepan.  Cook over medium high heat until the syrup reaches 260 degrees on a candy thermometer or when a small drop of syrup placed in a bowl of cold water forms a hard ball.  Remove from heat and add butter and vanilla.  Stir until well combined.

4.  Pour syrup over sorghum and using a silicone spatula or two forks, toss mixture until all sorghum is well coated with the syrup.  Let cool until just cool enough to handle.