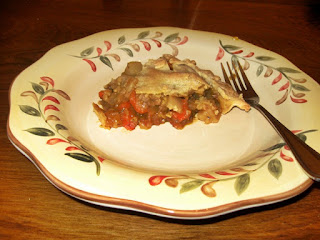 Okay, so this is one of those recipes that you have to try at least once.  A lot of people don't realize that pork goes well with sweet flavors, especially apple, and that there are ways to do a balancing act between sweet and savory.

The pumpkin in this recipe does double duty as a flavoring and a thickening agent, so if you can't eat pumpkin be sure to add a couple of tablespoons of arrowroot powder or other starch to your veggies and meat before adding your liquids and incorporate the starch in with the fat covered veggies and meat.  It makes thickening the pie much easier than trying to make a slurry later on.

You could make this recipe with a gluten containing crust if you wish.  I'm not including my recipe for gluten free pie crust right now, because it's still sort of ho-hum in the flavor department and has a tendency to crumble on you (as you can tell by the pictures).

So, here you go folks.  One pie crust filling that just shouts fall. 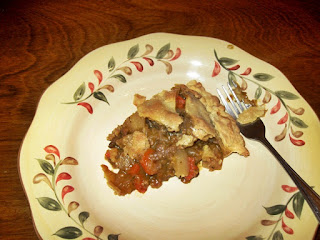 
1.  In a large preheated dutch oven add a few tablespoons of olive oil and then once heated add bacon.

2.  Brown bacon and once bacon has released a good amount of fat remove with slotted spoon to a small plate.

3.  Add pork to pan drippings, sprinkle with cinnamon and paprika and cook until browned.  Remove pork with slotted spoon and add to bacon on plate.   Add olive oil if needed to get about 2 tbs. of oil in the pan.

4.  Add onion, carrots, turnip, herbs, pepper, salt and apple and cook for 5 or so minutes until the onion is translucent.

6.  Add more stock, if needed to get liquid to about 1 cup.  Add pumpkin puree and cook until the mixture is thick and gravy-like (ie it'll look like pie filling).

7.  At this point, check your seasonings, salt and pepper to taste.

8.  Now, you have a load of options at this point.  Either spoon mixture into a 9 inch deep dish pie crust and cover with another crust, crimp edges and put some steam vents in the crust.    Or you can make some gluten free biscuits on the side and just eat the filling as a gravy-like dish with the biscuit on top (which I like since the biscuit doesn't get too soggy that way) and eat down through the biscuit into the filling underneath.  Or make a Sheppard's pie like I explained above.

If baking in a pie crust (I haven't noticed much of a difference between my gluten free crust and a gluten containing crust...I make those for the hubby...in the baking department), preheat oven to 400 degrees.  Once filling is done spoon mixture into a prepared deep dish pie crust.  Cover with another pie crust, crimp and cut out steam vents.  Bake for 30 to 35 minutes or until pie crust is nice and golden on top.

This recipe is a great one to make on a cold and windy day.