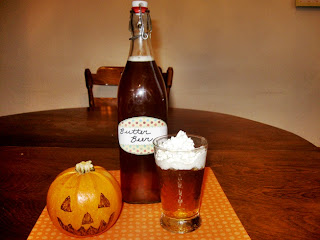 So, my daughter is a huge Harry Potter fan...well as much as one can be at five years old (she got that from me, I am nerd enough to admit *laugh*).  So, when I asked her what treats she'd like for Halloween she answered, "Harry Potter food" which meant in Arminaese that she'd like me to make treats like the characters in Harry Potter eat and drink.  So, I watched the first Harry Potter movie (the only one I could think of that had a Halloween scene in it) and noticed that while bright and flashy most of the treats on the actual table were just general treats like donuts and carrot cake.  Now those things I KNOW my daughter won't eat, so I went online to Muggle.net to see what they had for treats and beverages from the world of Harry Potter.  And I hit paydirt when I found a recipe for butter beer.  Heck, reading about butter beer in the books many times made ME want to try it, so I figured I had it made when I found the recipe.  Or, so I thought.

Unfortunately the recipe called for cream soda.  Something my daughter can't have because of corn syrup and the possible caramel coloring...oh and the citric acid...well you get the idea.

So, what is a mom of a corn allergic kiddo to do?  Well, I started experimenting with alternatives.

I finally got the making of cream soda down where I was happy with it (which actually took a little bit because I was going for refined sugar free syrup), but then when I tried to figure out the "butter" part things got tricky.  I tried mixing butter in with the soda syrup...ummm yeah...it didn't do what I wanted it to.  It just wasn't strong tasting enough and I really didn't want to add too much dairy to the mix for the sake of my stomach.  I thought of ghee, but really didn't want to make some to try that out and buying ghee isn't exactly cost effective (it's way cheaper to make it).  I thought of butterscotch, but that, of course, contained corn syrup.  And so, I started to get frustrated this last week trying to figure out what to do.

I finally, while perusing every single baking isle in creation for ideas and inspiration I stumbled across pay dirt as I was looking for different extracts I might be able to blend to MAKE something that tasted sorta like butterscotch.  I found it when looking through the wedding cake supplies.  Clear butter flavoring.  Butter flavoring is usually reserved for making buttercream style frosting for wedding cakes, so it is pretty strong tasting, it is dairy free so the syrup would keep longer and it tastes like...well...butter, so I could get the butter taste I needed in the strength I needed it in.  And the best part was that the mixture was clear to blend into different wedding cake mixtures (I'm sure) without discoloring anything, so no odd coloring agents to worry about AND it was citric acid free. It was a happy moment and only a few people looked at me as I let out a little kid screech of excitement (and yes, unfortunately, I am serious that I let out a little screech of excitement over a flavoring agent.  It's the little things in life ;).

The ratio for the soda syrup is pretty standard, so don't freak out when you see the high sugar amount.  The ratio of two to one with sugar to water makes a simple syrup.  I found that sugar in the raw makes a pretty good tasting syrup too if you don't have palm sugar and will give you much the same taste (sort of a cross between white sugar and brown sugar to me).  If you don't care about the refined sugar thing (which I always figure if I'm having to cut out corn syrup, why the heck shouldn't I just cut out the refined sugar too), just use white sugar and make sure to up your vanilla flavoring and butter flavoring until everything tastes like butterscotch (since white sugar is going to be less strong tasting than unrefined sugars are, so your syrup will probably need more depth of flavor added to it than the unrefined sugars). 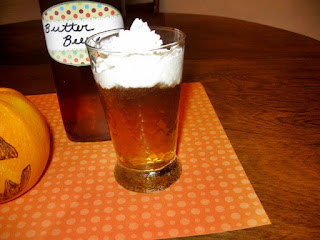 1.  In a heavy bottomed medium saucepan, stir together the sugar and water until well incorporated.

2.  Heat over medium high heat until mixture comes to a boil and boil until sugar is completely dissolved in the water,  about 3 to 5 minutes. Remove from heat.

3.  Add vanilla and butter flavoring to syrup (there will be bubbling and hissing as the alcohol evaporates violently when it comes in contact with the hot sugar...don't panic ) and mix well.

4.  Allow mixture to cool to room temperature on your stovetop (if using a vanilla bean just leave the bean in the syrup and it'll continue to steep as the mixture cools down).  Store in a mason jar or other lidded storage container in your fridge until ready to use.  Will keep for about a month (I'm estimating here, but it should keep for a long while since it's just simple syrup and extracts).

To make: Add mix to 2 liters of club soda or other carbonated water and serve in some cool frosted mugs (as should be the way of these things).  If using soda stream machine add 1 cup (1/2) of mixture to 1 liter of soda stream water (one bottle).

Serve as a float with your favorite vanilla ice cream (dairy or dairy free) or you can top it with some whipped topping of choice like whipped coconut cream or dairy whipped cream (to make it look more like beer), or just enjoy it plain.  No matter how you like it, this stuff is good.

I can see why Harry and his friends go gaga over this stuff in the books.