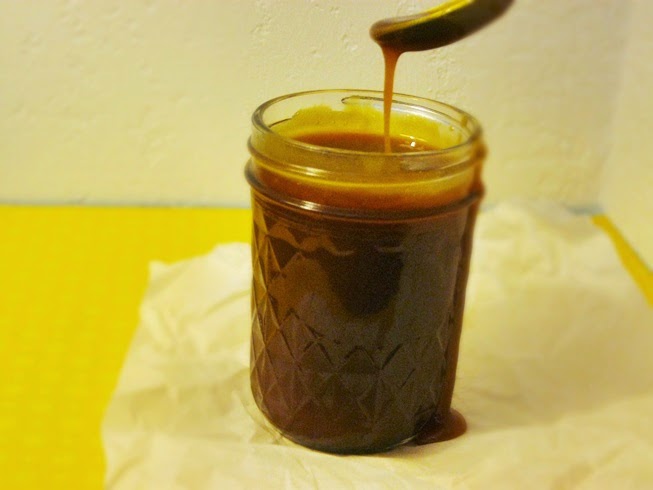 Summer!  A time of ice cream and yummy treats!

This summer I'm on a mission to get my daughter to eat things (so far I'm losing *scowl*), so I came up with this recipe as a kind of stepping stone.  The next step is a nice and thick hot fudge sauce to go on top of banana splits.  I figure if nothing will get her to eat things like frozen cherries, that something like a banana split, complete with caramel and hot fudge, will.

I'm trying to cut back on the daughter's consumption of cow based dairy to take it easier on her gut, so this recipe contains coconut cream (refrigerate a can of coconut milk over night, remove solidified cream from the top and use that.  Do not use coconut milk as the caramel won't come out thick with it).  If your child, like my son, is allergic to coconut, feel free to sub out heavy cream for the coconut cream.

How thick does this caramel sauce come out?  Well, let's put it this way.  Unless you are planning on making home made Milky Way bars and store them in your fridge you're going to want to remove the jar of caramel sauce out of the fridge for about ten minutes to come up closer to room temperature or you're going to have problems scooping it out of the jar.  Now THAT, my friends, is caramel!

To those allergic to dairy.  I used ghee (clarified butter) in this recipe.  Ghee has the dairy fat removed in it, so a lot of dairy allergic people tend to find they are okay with it, but if you are not, feel free to use coconut oil instead.  You need the fat, though, so don't drop it out completely (it helps it not set up into hard candy on you).

Your caramel's color is going to depend on how dark your honey is when you start.  Mine turned out pretty dark because my big jug o' honey is starting to get dark with age, but if you use light colored honey I'm betting that this will come out lighter for you.  Either way, though, it's delicious! 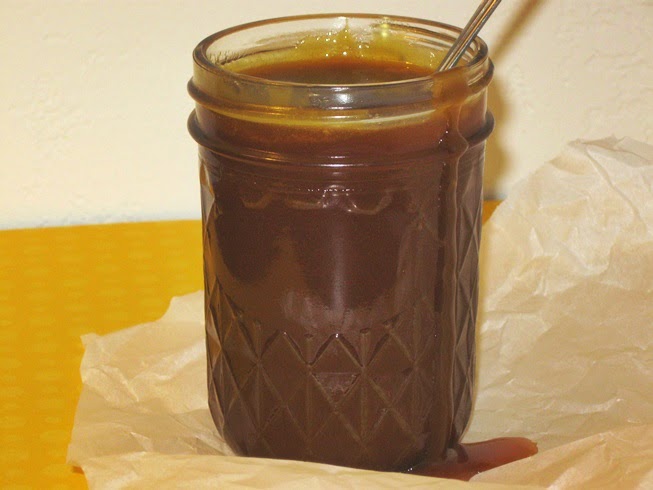 
Instructions:
I'd suggest storing this in fridge just to be safe.  Should keep for at least two weeks in the fridge.  Let sit at room temperature for about 10 minutes before using to let it soften back up.