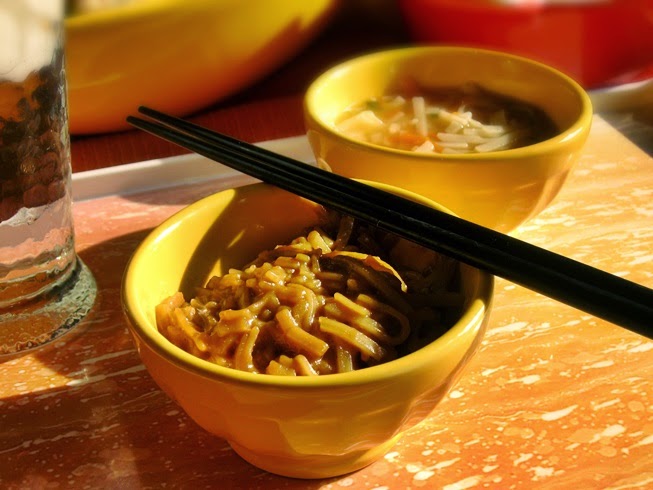 This is a two for the price of one recipe.  In that I created two recipes, in one night, hoping my daughter would try some new good-for-you food if I used one of her favorite movies at the moment to try and get her to eat them.

She DID however, try the broth to the soup, so it wasn't a total loss in that she drank a combination of chicken and vegetable broth and she actually drank quite a bit thinking she was getting out of eating the "ucky" vegetables in the soup.  See, mom is learning!

My daughter has a mini-obsession going with Kung Foo Panda right now.   We haven't had TV in the cable sense in over seven years, so movies are what we have around here.  I had bought Kung Foo Panda years ago during a Black Friday sale and my kids didn't even watch the first thirty seconds of it before they decided they hated it.  Since they were young, I just put the DVD aside and waited.  About a week ago I ran across it in our DVD binder and decided that it was worth a shot.  And yeah, we've been watching it for a week straight.

Since my daughter is in love with the movie right now, I decided I would try to make Secret Ingredient Soup, which played a major role in the movie.  Since all the recipes I could find online were basically chicken noodle, soup, which I thought wasn't all that cool, and none of them were really oriental flavored or gluten free (they all used wheat noodles) I figured that wasn't going to work for me.  So, I made my own Asian inspired soup, which actually does have a secret ingredient in it (psst...it's fish sauce, but don't tell anyone ;). And since I had an open packet of stir fry rice noodles, I decided to try and re-create peanut sauce noodles, which I've been missing, using almond butter.  And hey, it worked pretty slick!

So, here you go folks!  Two recipes for the price of one!  Stick on Kung Foo Panda (1 or 2...we haven't seen 2 yet) and see if your kids will try some soup I think Pao himself would approve of! 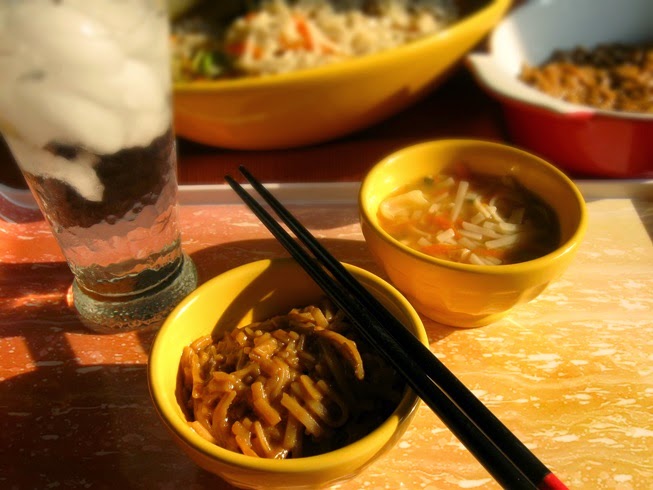 
Instructions:
Serve alongside Pea-No Noodles for a fun Asian-inspired meal (if you have meat demanders in the family, serve with some baked fish or some prawns for a truly awesome meal) 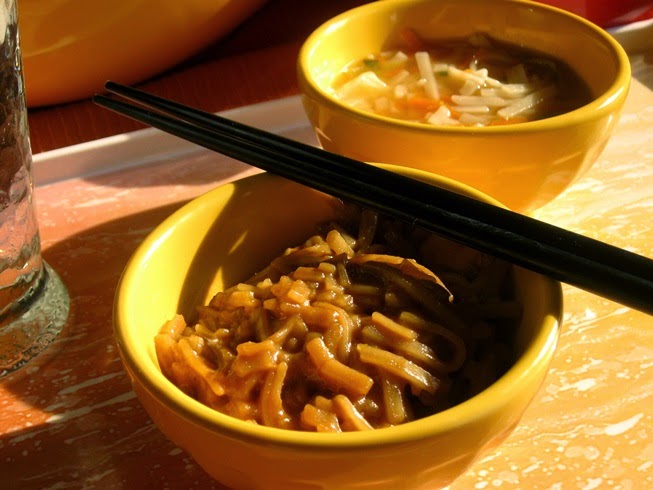 
Instructions:
Serve both of the above dishes with chop sticks for a lot of fun!

Note:  This post contains affiliate links.  I am a proud Amazon.com associate, and if you order through the links on this post I get a small amount of money from Amazon as a way to thank me for spreading the word about their products.  The opinions and feedback about said products, however, are entirely my own.
Posted by Erika, "The Make Do Homemaker" at 11:28 PM

Thanks for this recipe, it looks good to me! My daughter loved and loves the onion soup at Benihana, she has since she was a baby and she's almost 6. She doesn't like the floating mushrooms and onions, but just the broth and eats it with a straw. Kids surprise you with their funny taste sometimes, as you well know! :) Hope you are having a nice summer up there! It's rainy here in Seattle..imagine that.

Erika, "The Make Do Homemaker" said...

Right now we're getting smoked out due to the fires down South, but we're surviving :). Thanks for stopping by! It's great "seeing" you!