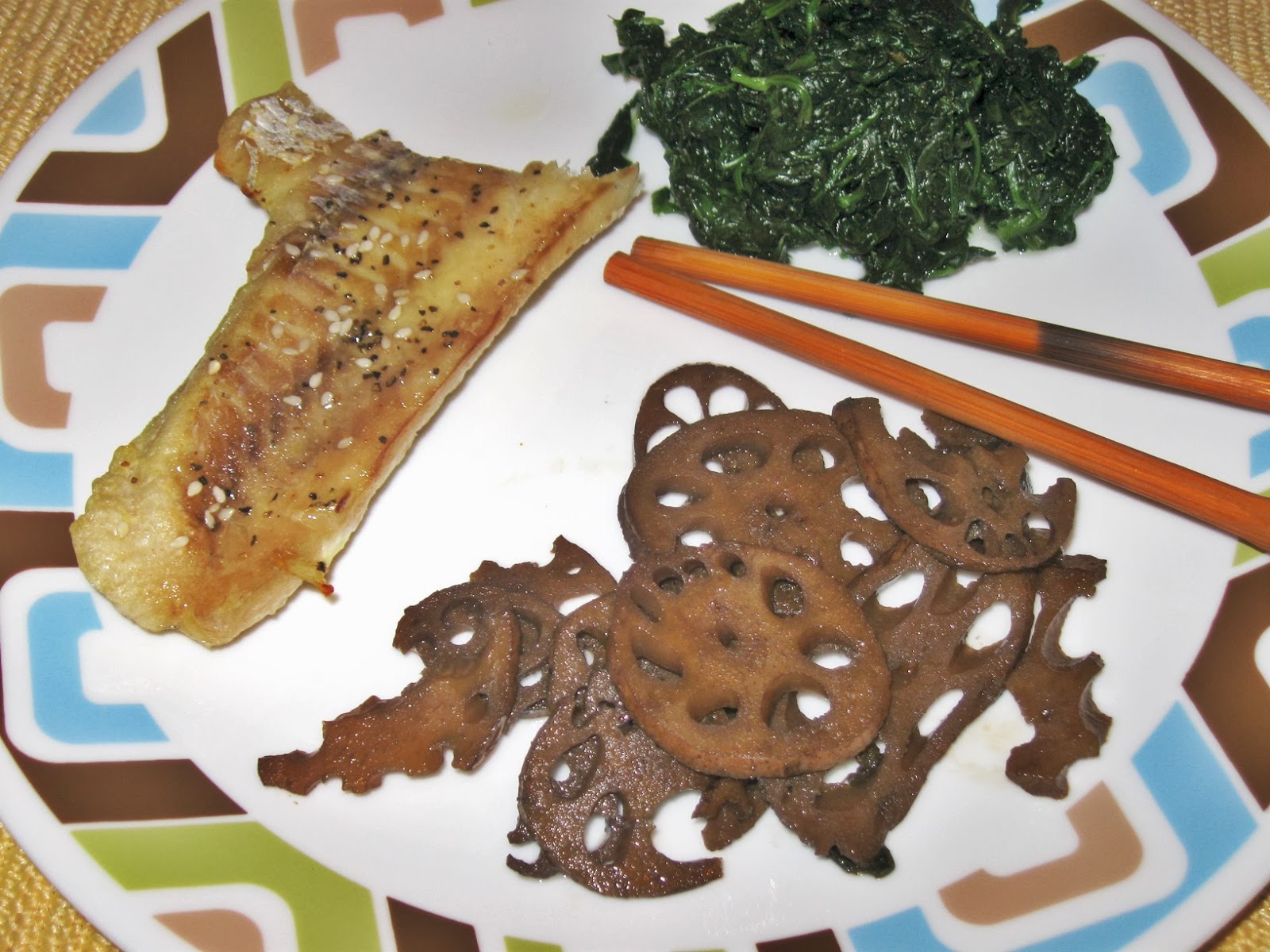 One of the main challenges in my life at the current time is trying to find nutritious foods my children will eat.  This is not an easy task as my daughter is super picky and my son has Sensory Processing Disorder that goes hand in hand with his autism.  And the old adage that "if a child is hungry they will eat"?  Yeah, that doesn't fly with my kids.  They're cute that way.

So, one fine day, I was watching a Rifftrax short, of all things, with my family that was called, "Families, Food and Eating" (hysterical short by the way) which explored how different cultures/countries had different sets of eating habits.  In the short, there was a family from Tokyo, Japan and they were following a cute little boy and his family.  One of the things that his mother bought for dinner that night was called Lotus Root, which he proclaimed as his favorite food about three times throughout his portion of the short.

Never one to shirk away from ANYTHING that a child proclaims is yummy to try on my kids that doesn't look too odd (part of the picky and SPD thing) and actually possesses some nutritional value, I looked up Lotus Root online.  And I found that while pretty much an unknown veggie in this country in Asian cultures Lotus Root is about as versatile as a potato.  It has a neutral flavor on it's own, will absorb the flavor of whatever you cook it in, is high in fiber (big bonus with my daughter) has a lot more nutrition than a potato, looks like a honeycomb (which I honestly thought was pretty neat) and has the texture that is kinda like a water chestnut.  All of which added to one big "let's do this thing" in my book.

So, I looked online and found lotus root canned and dried.  I went for the dried through Vitacost.  NOT the cheapest thing to buy, mind you, but I was willing to give it a shot.   I have since found out that any Asian market, including New Segaya, sells lotus root, usually fresh, so the next time I'm in Anchorage I'm SO buying  a bunch and drying it (not to mention cooking it fresh *laugh*).

When it came in the mail I could not wait to make it.  I looked online for recipes and found one for an Asian flavored Lotus Root dish, which I had to tweak to fit my needs (my daughter won't eat anything that has "green stuff" on it, so the green onion in recipes was out and she doesn't like chunky things in her food, so the raw garlic I found in many recipes was out as well).   I tried to recreate the meal that I saw on the short on Rifftrax, just to be safe that everything in the meal would go together and sat down to eat with my family.

Final verdict?  I LOVED the lotus root, my husband liked it and was curious to see what else I could do with it (to the point he is willing to take a trip into Anchorage with me to New Sagaya the next time we're in town to get a bunch more) and my very picky daughter even ate two pieces of it (adult portion is five slices, so hey I thought that was pretty good) and while she kept saying she didn't like it, she'd eat bites of it when my husband and I weren't looking (or at least she THOUGHT we weren't looking.  Can anyone say stubborn???).

Lotus root is indeed nuetral flavored, but it has a slight fresh taste to it and indeed, even the dried once reconstituted and simmered for a while until it was tender was still crunchy like a water chestnut.  I found it to be somewhat addicting myself and my husband even went back for seconds on it.  I can not wait to experiment with this veggie further, but here's the first recipe I made. 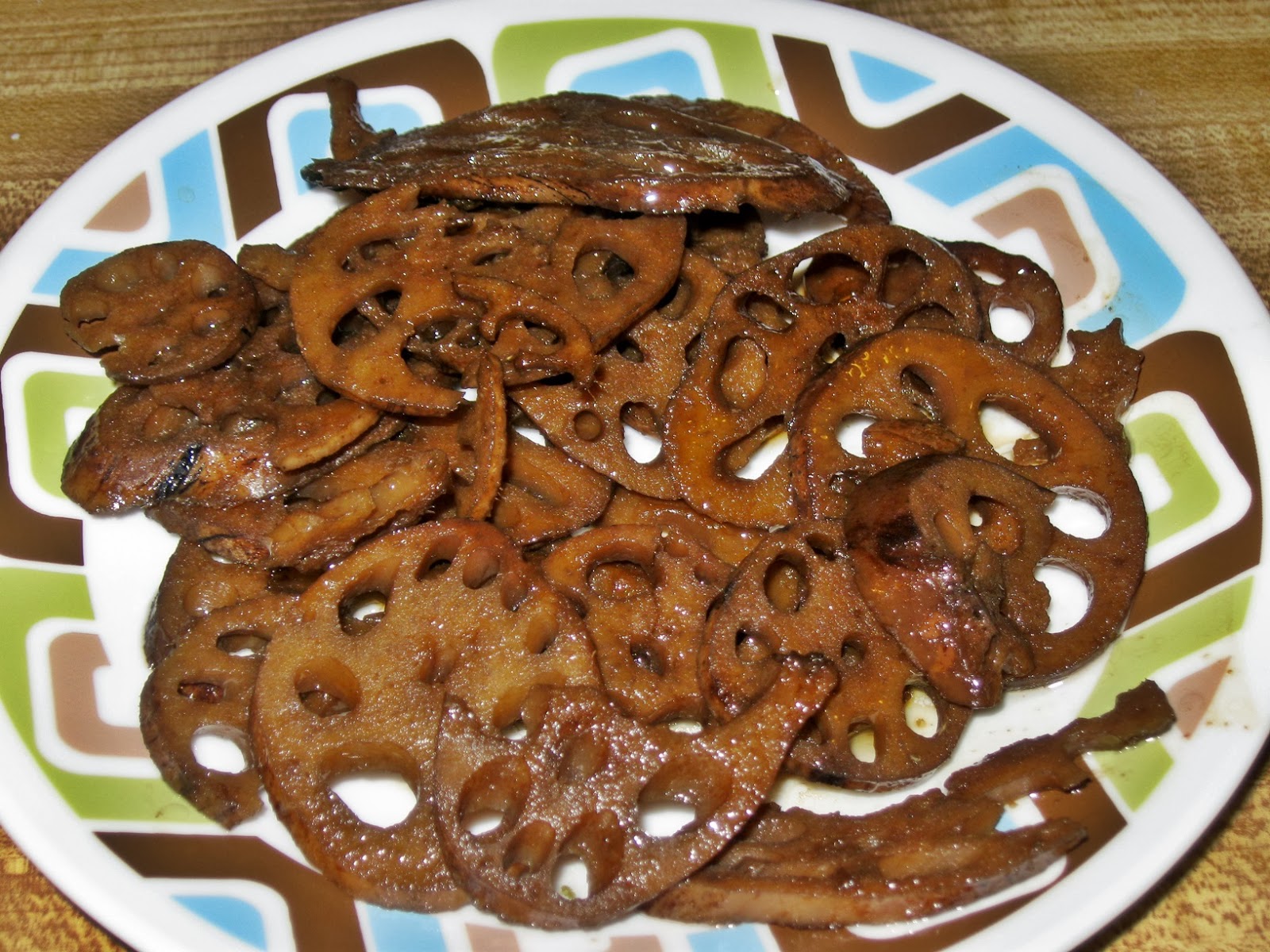 Asian Style Lotus Root (kid friendly, as in no chunkies or green "stuff")

Drain your reconstituted lotus root and set aside.  Heat the 1 TBS neutral oil in a large skillet over medium high heat.  Add lotus root slices, garlic powder, onion powder, sesame oil and tamari.  Reduce heat to medium.  Saute for 4 to 5 minutes or until the root takes on a nice golden color.  Add water to pan and simmer on low heat for 5 to 10 minutes or until roots are tender (you should be able to skip this step if using fresh lotus root since it'll have more retained moisture than the dried would).  Remove roots with a slotted spoon to serving dish.


Serving recommendation:   Tastes great with some baked fish and dark greens (I used spinach, but if I had it to do over again I'd make it with chard or kale next time).