Asparagus and Bacon: How to Dress Up Frozen Asparagus 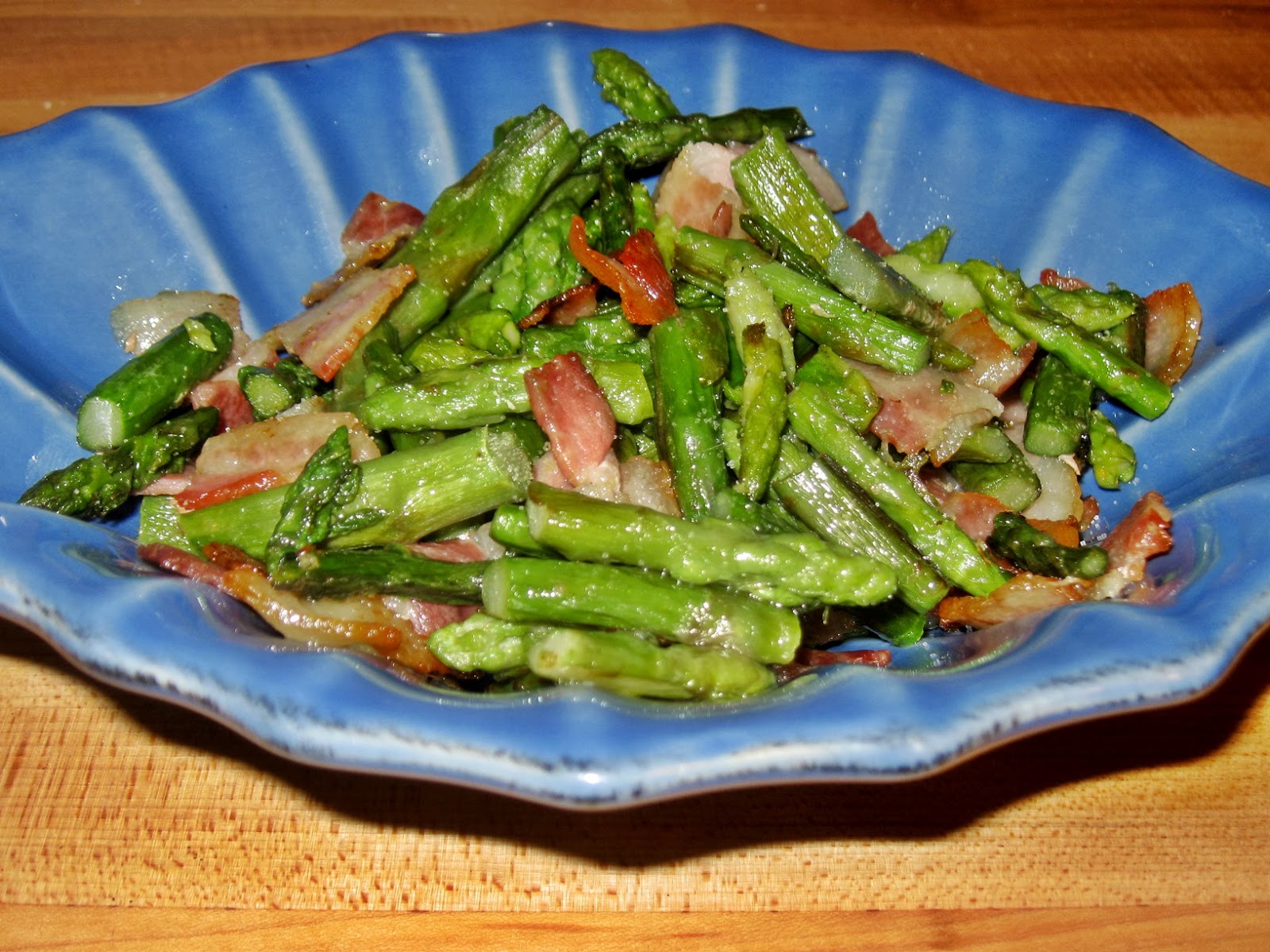 Okay, this sort of ties into Valentine's Day and my daughter.  In short, Valentine's Day we ended up in the ER all night with Armina.  I had to pick her up from school early on Valentine's Day because her stomach hurt.  I thought it was her usual stomach issues, but suddenly she was curled up on her bed, shaking, and telling me her belly hurt.  Worried I touched her stomach where it hurt and she shot away from me like I'd stabbed her.  I turned to Google for answers on what could cause a severe pain on her belly button and appendicitis kept popping up.  Feeling panicky, I quickly got a babysitter for my son, called my husband and he rushed home and we were off for a night of worry with one utterly terrified daughter.

We ended at at Providence after Urgent Care recommended we go to the ER as the doctor was concerned about something serious being wrong with her as well.  One urine analysis later and we found out that the severe abdominal pain was due to a bladder infection (a good one at that), so the doctor gave Armina her first dose of antibiotics, some Motrin and we got home after midnight.  Yeah, that was Valentine's Day.

So, a couple of nights later I decided we'd have a special dinner and relax at home and one of the things I really wanted to go with dinner was bacon wrapped asparagus.  Unfortunately, all of us who live in Alaska know that trying to find good quality produce in winter...well it's is iffy (well more than iffy, it's downright impossible sometimes).  So, I couldn't find any asparagus that I felt like shelling out a lot of money per pound for.

I went looking and found some cut asparagus spears in the frozen food section, figured that I could make that work and dress it up so it'd taste the same as bacon wrapped asparagus spears.

In short, it did work, it was delicious and my husband who isn't even a big fan of asparagus went back for thirds.  It was nice to have an evening with good food and to just relax for a change. 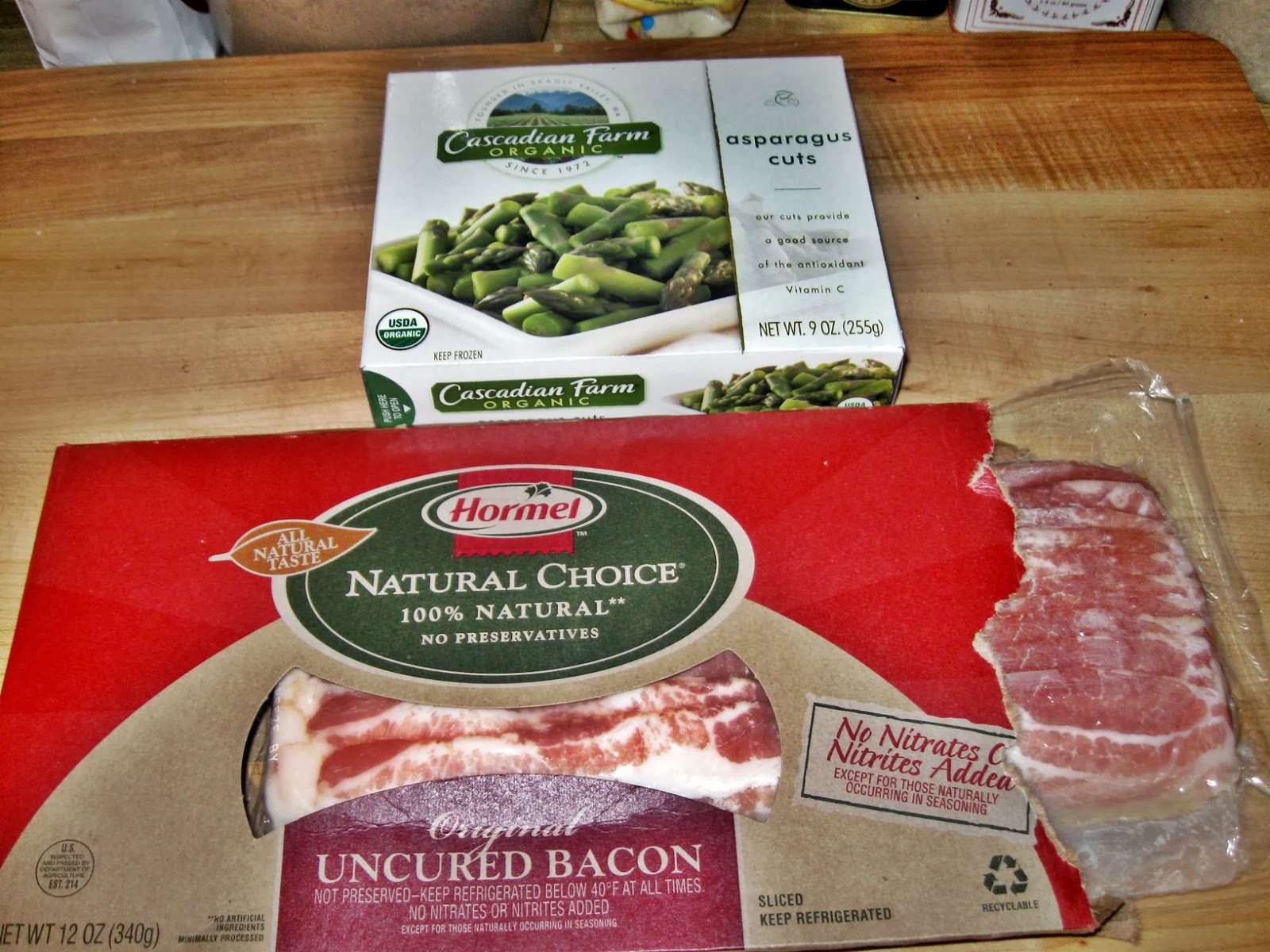 Asparagus and Bacon (How to Dress Up Frozen Asparagus)

Cook Asparagus according to directions on box (the one I had called to steam it in the microwave) and drain it well (I dumped mine into a wire mesh strainer and just drained it really quick).

Cut bacon into bite sized pieces (I did mine about 3/4 of an inch).

Spread asparagus and bacon onto a cookie sheet, preferably lined with parchment paper, spreading out to mix the bacon and asparagus up on the cookie sheet.  Place pan in middle of oven.

Bake for 10 to 15 minutes, checking after about 8 minutes and then every two to three minutes after that until bacon is cooked (if you like crispy bacon I'd cook it on the cookie sheet FIRST and then just mix the asparagus and heat it through.  We like "wimpy" bacon in my house, so I just cooked them together).

Scoop into serving bowl and serve with your favorite main course.

This post is part of Whole Food Fridays on Allergy Free Alaska.
Posted by Erika, "The Make Do Homemaker" at 7:40 PM