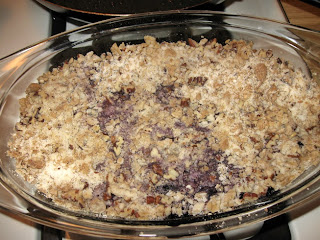 When I was a child we ate apple crisp every fall until honestly I never wanted to look at it again.  I'd change my mind once fall came around again, but we ate the dessert a lot due to the fact that we had apples coming out our ears.  I think that must be a common problem in New England as I remember talking to a lot of people who got really tired of eating apple sauce and apple crisp before the fall was done.

What I didn't realize then was that what I was eating was just a different kind of cobbler.  But, even the crisp I ate then wasn't even a TRUE crisp.  I didn't learn that wonderful culinary greatness until I moved to Pennsylvania (thank you Pennsylvania Dutch!).  There I was exposed over the course of ten years to things such as perogies and how a true crisp was made.  In that time I found that I didn't like apple crisp as much as berry crisp, which is how I mainly make crisps to this day.

I learned how to make a true crisp from my grandma, one of the best bakers I've ever known (don't tell my mom I said that ;).  The original way she taught me was by the good old "seat of the pants" method, so it took a few tries to actually remember to measure to get the quantities measured for this recipe.

One of the big things I changed for this recipe was that the original way to make this was to use oats, which, of course, I don't exactly have lying around my house anymore with the oat allergic child.  So, I started experimenting and I found that this can be made with quinoa flakes, Arrowhead Mills Buckwheat Maple Flakes (what I used this time around to make this), other breakfast cereals that you might like, gluten free ginger or other cookies, or you can even use crackers...the recipe is pretty versatile that way.

I used almond flour in this recipe to replace the flour my grandmother used to use.  If you can't do nuts at all just use whatever gluten free flour you like, but be careful using too much rice flour as I think the grainy texture might be a bit off putting.  As for the chopped nuts if you can't do nuts, I'd go with chia seeds, hemp seeds might be pretty tasty or if you can't do seeds just increase the amount of quinoa flakes/cereal of choice, etc to make up for it.  It won't be exactly the same, but I think it'll still be tasty.

So, I guess let's get this ball rolling shall we? 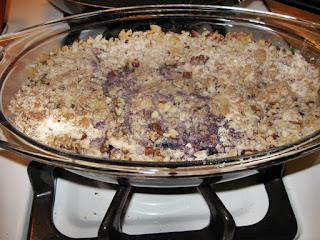 For the Fruit (I like blueberries or raspberries for this):
For the crisp topping:

Prepare the topping by combining the almond meal, 1/4 cup palm sugar, nuts, spices and cereal in a mixing bowl and then using your fingers work the butter into the dry ingredients until everything is crumbly.

Prepare the fruit by taking the 1 TBS of palm sugar, starch, and a small handful of the crumble topping (I'd say about 1/3 of a cup if I had to guess...this isn't an exact science, so don't sweat it) in a medium sized mixing bowl and using your hands toss the fruit and mixture to combine (it seems to go easier on the fruit to do it this way.  It's the way my grandma taught me so I do it that way).

Pour mixture into a 1.5 quart baking dish (small casserole dish would work or a pie pan if you don't have that) and bake on middle oven rack for 40 to 45 minutes or until fruit is nice and bubbly and the top is crispy.


Cool for about 10 minutes before serving unless you relish burning your mouth severely.  Just a word of advice there.