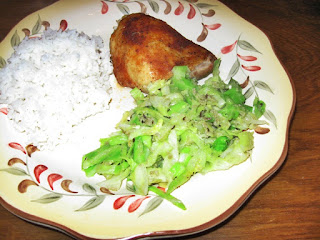 The biggest challenge when you end up baking two huge batches of chicken, I found, is that if you don't switch up side dishes and get creative, things not only get boring, but you'll be lucky if your family doesn't rebel.  So, to stop boredom from taking hold during a week long menu involving baked chicken for 1/2 of it, I made up some new recipes (or in this case adapted a recipe to suit our needs).

With last week's produce I had thrown a head of cabbage into our cart because the cabbage looked really nice, as usual was inexpensive, highly nutritious and actually pretty versatile.  Anymore, believe it or not, I tend to shop for whatever produce looks really good when I go shopping for groceries that week and then plan side dishes, and in some cases entire meals, around the produce.  I've found it just works better than coming up with a recipe only to find that one of your key ingredients can't be found in the local store, or worse yet, just looks terrible, thus dashing your hopes of making a recipe you really wanted to try.

The original recipe this is adapted from is an Alton Brown recipe, "Shred Head Butter and Bread".  I saw it on his cooking show "Good Eats" from one of my many tapes I have of the show the other night and thought it sounded darned tasty.  Biggest problem with it was that other than cabbage the main ingredient was pulverized seasoned croutons.  Now, store bought croutons are one of the big "no ways" around here because they contain not only gluten and garlic, but also (this one was surprising for me at first) corn.  So, cooking with the suckers would be a complete and utter waste of time.

So, this is the recipe adaptation I came up with using my imagination and it turned out delicious.  Actually, this is one of my husband's favorite cabbage dishes now.  Note that I made this recipe with butter, BUT you could easily use coconut oil in place of the butter and it wouldn't lose any flavor, I'm pretty certain (I've yet to try it though).

So, here you go folks.  One very budget friendly recipe that is delicious and good for you.

Bread and Butter Shredded Cabbage (adapted from the recipe "Shred Head Butter and Bread" by Alton Brown)
Since I only adapted the sauce part of this recipe from Alton Brown's I'm going to direct you to his original recipe HERE for directions on how to prepare the cabbage.

While the water is boiling for your cabbage, melt butter (or 1/4 cup coconut oil) in a large skillet or sauce pan over medium low heat.  Add sage, thyme, pinch of salt, onion powder and ground mustard to the melted butter and whisk to combine.  Add rice crumbs and stir well to combine with the butter and seasonings and then sprinkle the caraway seeds on top and stir well to combine all ingredients.  Once everything is well incorporated, kill heat and set aside.

I also discovered while making recipes throughout the week that there is a really easy way to produce your own poultry seasoning without the added "stuff" in it, it's super easy and it gets the job done.  So, here's that formula...

Combine ingredients in a small lidded container and shake to combine.  Use as you would regular poultry seasoning.