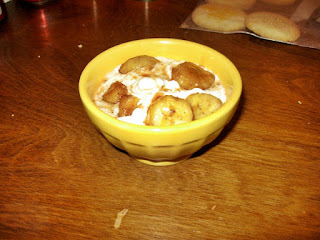 So, here's a really good dessert that won't make your stomach hurt if you are dairy intolerant.  This makes a spectacular topping for coconut milk ice cream (seen here), or on top of cake or whatever.

And the best part is that I used out and out ripe bananas for this, instead of under ripe like the original recipes call for and I have to say that while not as pretty (since I just slice the banana up instead of the traditional method of cutting the bananas into something more fancy) it sure is tasty.

I also cut the flambe part out of this recipe (sorry pyro fans) as the idea of setting ANYTHING on fire in my kitchen with my son around, for a short period of time or not, scares the living beejeebiz out of me.  Cutting out the "flame on" part of the recipe will not do anything to wreck the flavor the rum imparts once it cooks out.  The flame part of the recipe is just for show, so don't think that it won't taste good if you don't set something on fire.  The alcohol will still cook out just fine.

If you can't or won't use alcohol when cooking and are tolerant to corn you can sub out 1/2 tsp. of imitation rum extract instead of using rum and then just use 1 TBS of orange juice to make up for the loss of liquid from the rum.  I personally love this recipe with the coconut rum instead of the traditional dark rum as the coconut just seems to compliment the bananas better, at least to me, but use whatever rum you like the best. 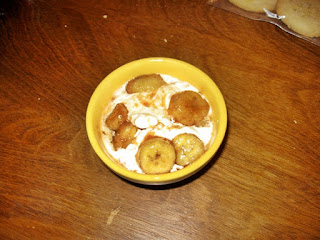 Remove pan from heat and add rum.  Return to heat and cook until mixture thickens, about three to four minutes (the alcohol will cook off quickly).

Add bananas and cook for one minute, spooning sauce over bananas as they cook.