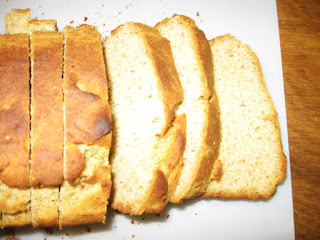 Just a couple of points before I start.  One:  I am so darn proud of myself as this was my first ever from scratch recipe that completely and utterly failed me about the first four times I made it.  No joke.  I've always been a person who has this fear of failure, so I feel GOOD for combating that fear and winning (I know I'm odd, but I would not let a loaf of bread mock me ;).  Two:   This also ties DIRECTLY into "Try Something New Saturday" as this was my first attempt at doing a "bread from scratch recipe" and MAN was it an ambitious one.  Read on to learn more.

So, what was this master plan of mine? It was a lofty ideal I was working toward as it was not only a "from scratch" bread that I wanted to develop, but an allergy friendly one at that and one that would not only taste good but also would be good for you.  I was working on it for a friend of mine who has children with numerous food allergies among them and she was trying to figure out how to get a bread recipe that they could all eat.  The biggest obstacles to surmount, for me were soy, corn, egg, pork, dairy and gluten, but I knew there had to be a way to overcome it all and get a bread her kids could eat, everyone in the family could enjoy and I could eat the results of around here from my experimenting (so it also had to be coconut free for the son).

So, I started working with recipes to see what I could come up with to help her out.  Unfortunately, after three failed attempts that would just fall apart as soon as I took them from the oven and had to be thrown away (it was sad, although I did snack on a lot of the crumbs), I quickly realized that bread needed these things called "binders" and the miniscule amount of stuff I had binding the recipe together was not going to cut it (there's a reason most gluten free breads call for like 4 to 5 eggs...the eggs take the place of gluten in the recipe).  So, I went and researched alternatives.

Originally, I had ideals to make a gum free bread too (since I know that the gums can get to people's stomachs sometimes), but after researching binders I quickly realized there were problems to cutting out the gum.  Alternative binding agents for recipes were tofu (soy), yogurt (dairy or dairy alternatives that had potential soy contamination issues), gelatin (pork, which there was a pork allergy to worry about too), fruit (really didn't want the bread to taste fruity), etc.  So, I decided that a gum free bread just wasn't going to work.  So, I put some gum into the bread (guar gum for the sake of corn allergies) and some egg substitutes.  And, lo and behold, the bread came out of the oven and it was moist and bready (yes, that's a word ;).  And yummy...mustn't forget yummy!

My husband likens the taste of this bread to bran muffins, but I don't find it that "brany" tasting and it isn't quite as crumbly as bran muffins either, although it does have that quick bread vibe going on (like a lot of gluten free breads).  It does have a slightly sweet flavor to it though, that I actually really like, but if you aren't overly fond of it, just reduce the amount of honey in the recipe to 2 TBS or so.  It IS healthy for you, though, as it's got good-for-you flours in it and is free of refined sugars too.  By the way, this makes great toast too and if you are thinking of making sandwiches toasting is a must I'd say (unless you wrap it in some wax paper or something to help catch the crumble, because I think this stuff is going to crumble on you without toasting it with any type of real "bread abuse" like sandwiches call for).  I DID add almond meal to this (I got peanut free almond meal in the mail this week), so if you are nut free I'd suggest trying like pumpkin seed meal (throw some pumpkin seeds into a coffee grinder and let er' rip), or some other type of seed meal in it's place maybe.

But, the bottom line, is that this recipe did everything I wanted it to do and bonus it's yeast free so it takes five minutes to mix up and it's ready in less than an hour.  Beat that with a stick!

So, Shannon, my friend, this one's for you! 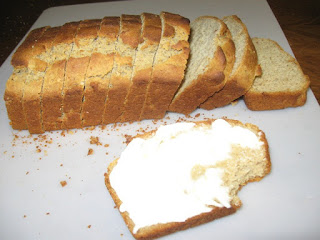 2. Grease a standard loaf pan (I used cast iron, but trust me greasing is a good idea with gluten free baking unless you relish eating it out of the pan).

3. Mix dry ingredients in a bowl well (I just use my hand and stir, some people use a whisk...whatever works for you).

5. Stir completely until mix is thick and moist (stand mixers are your friends when it comes to this stuff). 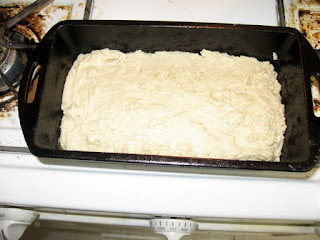 6. Spoon batter into loaf pan and smooth top as best you can (makes it look better when it comes out of the oven).

7. Bake 40 to 45 minutes or until tester comes out clean.  Place on a clean dish towel, cooling rack, or pot holder to cool.  Let cool completely before slicing (it'll be less likely to crumble on you).  Slice and then store in freezer (my suggestion anyway as I'm not sure that this bread  won't grow stale quickly).  Best served toasted.