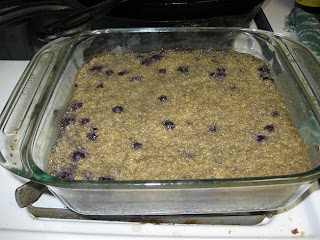 So, oatmeal.  I love it.  I miss it.  Now that my son has been diagnosed with an oat allergy, I refuse to keep much of anything that can cross contaminate in our house.  So, I started trying to think of alternatives.

And that is when inspiration hit me.  What about Baked QUINOA?

Actually, I honestly can't take all of the credit for this recipe.  Shirley from Gluten Free Easily posted something up about quinoa on her Facebook page (which by the way if you are in the LEAST gluten free, or just looking for culinary inspiration, you NEED to follow this woman on Facebook!  You will NOT be sorry!) and I made a comment about maybe slow cooking quinoa in a crock pot and maybe making it into a breakfast alternative to oatmeal.  I was actually sort of trying to suggest that SHE try it *laugh*, but she just told me, "Great idea!  Do it!" (well paraphrased but you get the idea).  Since I couldn't get someone else to do my "dirty work" for me, I decided to get off my keester, put this on my "try something new" list and just go with it.

I kept going over crock pot quinoa in my head, but finally decided against it for one simple reason.  I never even tried OATMEAL in my crock pot (was always worried about sticking and burning issues since my crock pot is so big), so the idea of trying a new grain, as well as a new METHOD, was just totally outside of my comfort zone.

So, finally I decided to try baked quinoa.  I'd baked oatmeal before and knew about what it should taste like and I'd know if the quinoa was a total and complete failure that way.  So, I hit the books and the various magazines I had for inspiration and came up with a recipe, and made it today.

And you know what?  It came out pretty DARN good, least in my humble opinion.  If you eat this alone (right out of the pan that is) you'll get the quinoa aftertaste.  As my husband put it after eating a few bites (he's never eaten quinoa, but was behind the idea of me trying new recipes that my son might eat), "It's got a vegetable-like aftertaste to it, but it's not bad.  I'm not sure what I think of it."  Since he didn't immediately spit it out and wipe his tongue (my experience when I'd cooked and eaten quinoa I'd made the first couple of times I made it), I figured this could be classified as a success.  If you put some warm milk (or if eating straight out of the oven just pour some milk, or milk alternative, over it) and pour a bit of maple syrup over the top...it takes on a whole new layer of yumminess :).  Just a note this made a LOT so if you want just like an 8x8 pan of this, cut this recipe in half.  I got one 8x8 pan and a casserole dish FULL of this when it was done.  I was going to make this with apples, but was afraid that they wouldn't cook quickly enough (you'll see why), so I went with blueberries and they worked fabulous (I had some wild blueberries in the freezer from a neighbor :). 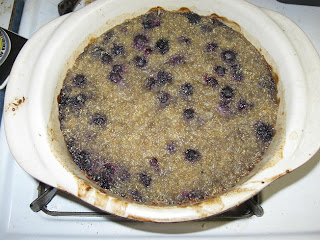 1.  Before we get started on anything else, cook your quinoa.  Sounds like an odd start to things huh?  Just trust me on this.  First soak your quinoa in PLENTY of water (I used my 8 quart stock pot filled up about 3/4 of the way).  This helps to remove a nasty bitter tasting coating the quinoa has on it.  I soak mine for 30 minutes or so giving the water a stir a couple of times.  After the soak is over drain the quinoa and place back in your pot with plenty of fresh water (once again I went up about 2/3 of the way up the stock pot with fresh water).  This is cooking quinoa via the MAID in Alaska method and it works FABULOUSLY!  Bring the quinoa to a boil and boil until done (as in no longer super chewy and it's expanded in volume a lot).  Mine took about 25 minutes or so on a good simmer.

2.  Drain your quinoa again.  I just left mine in the drainer while I put the rest of the ingredients together, mixed the final product up in the pot I cooked it in and then added it to my baking dishes (hey if you can save yourself from having to wash another bowl, why not right?).

Serve warm with milk or serve with warm milk (if doing left overs) and some maple syrup.  Nuts, if you can have them might be a nice addition, especially a few specks of pecan or something similar served on top.  Yum!

The nice part about cooking the quinoa in plenty of water and then draining it BEFORE really "starting" the recipe, is that it doesn't end up completely overpowering and makes it play well with others a LOT better.  I liked the way the quinoa turned out a LOT with this recipe I have to proudly admit :).

Just as a side note, since this is quinoa, I'm going to try and freeze one pan of mine and see how it does (since it's not like it's oatmeal that isn't going to freeze well at all) for a little bit.  I'll try to give you an update on that :).

Overall I'd say that this recipe and this experiment trying something new outside of my "comfort zone" worked out rather well.  I hope you enjoy it too!  Enjoy!
Posted by Erika, "The Make Do Homemaker" at 4:26 PM

I've made quinoa in my rice cooker with perfect results. For breakfast I'll top with (coconut) creamer, cinnamon and raisins for breakfast