DIY: Making and Canning Your own Pancake Syrup 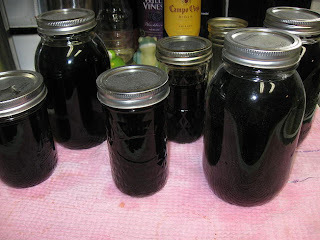 When I was growing up in New England I just assumed that everyone in the universe lived on real maple syrup (you know from the tree) on their oatmeal in the morning, on their pancakes for breakfast dinners or heck even in their coffee (knew an old timer who used to do that).

And then I moved out of New England and realized that if you don't LIVE in New England where you can get the maple syrup from those wonderful trees a bottle of maple syrup cost as much as a good quality chunk of beef at the store.  I learned that people lived off of these bottles of "pancake syrup" that were shaped like ladies in aprons and other, what I considered at the time, monstrous concoctions.  And being a young working woman I shelled out the moola for the real thing of maple syrup and rolled my eyes at those other people in the world who thought that maple syrup came out of some jar shaped like a lady instead of an honest to goodness maple tree.

And THEN I moved to Alaska.  Where the price on a good quality maple syrup runs about, what, the price of a small used car?  And suddenly one night while deader-than-dead broke in my first year of marriage I looked at that evil bottle shaped like the lady in the apron sitting at my in-laws table and swallowing my New England pride I tried it.

And you know, while it didn't taste like maple syrup to me, and it still really doesn't, it really was NOT bad.  After a lot more years of being dead broke and doing a lot of shopping where I'd just plain skim over the price of the real "good stuff" maple syrup and settle for the less expensive substitutes I learned to deal with it just because of the price if nothing else.

And then I had kids.  And those kids developed issues and I started reading those darn nutrition labels.  When I started seeing, "corn syrup" on like every bottle of pancake syrup I picked up I got concerned and made an attempt to find my own recipe to make.

And I found it.  Not only is this recipe INSANELY simple to make it doesn't contain any specks of corn syrup (which is doubly good since I'm trying to do a "no corn syrup" rule for my son).  Advantages of this recipe?  If you want a vanilla pancake syrup instead of a maple one, add all vanilla extract to the recipe.  If you, like me, love a really heavy maple flavoring to it, add more maple flavoring (I keep the vanilla amount the same no matter how much maple flavoring I use though :).  Heck you could make peppermint pancake syrup if you wanted to...although I'm not really sure why you'd want to do that....but you get the idea.

Now this recipe DOES have a problem in that it'll crystalize over time in your fridge since it's like 100% sugar (grows sugar crystals).  If you want to help avoid this just add the aforementioned corn syrup (I'd go with like 1 tbsp per recipe of the stuff) because that'll help stave off crystalization.  Me personally?  I'll deal with the crystals for the sake of no corn syrup (although I keep swearing one of these days I'm going to remember to add some rice syrup to it and see if that helps...if I ever remember to buy any at the store *laugh*). 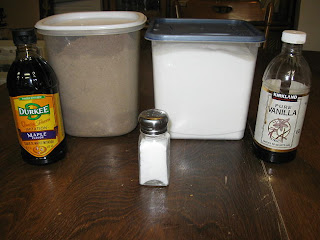 Home Made Pancake Syrup (via Our Country Haven Forums) 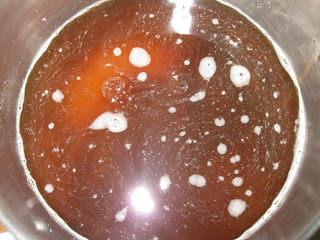 Step 1:  First get your hot water bath canner ready to go as that's going to take a while to get up to temp.  Prep your canning jars (I usually have mine ready to go before I even start this by putting them through the sterilizing cycle on my dishwasher, but you could heat them up in boiling water while you're doing everything else).  Put your lids and rings in a small pot of boiling water to sterilize them and get the binding agent on the lid of the canning jars nice and soft (I usually boil them in a small pot of water before I start doing everything else and just move the pan off the heat onto a pot holder on my counter...they'll stay plenty hot that way and you won't have to worry about your dishwasher destroying the bonding agent on the lids :).

Combine both sugars,water and salt in a large saucepan.


Step 2:   Heat on med-high,stirring often,until boiling and sugar is dissolved. 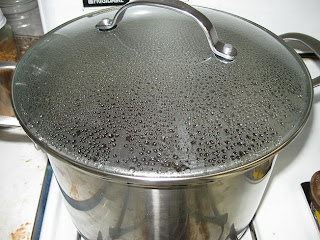 Step 3:  Reduce heat.Cover Simmer for 10 minutes.  Make sure not to peek for the first 3 to 5 minutes (it'll dissolve any wayward sugar crystals and help your syrup to stop crystals from forming) and really you shouldn't need to do anything for 10 minutes and just leave the lid on.  Trust me this mixture takes care of itself. 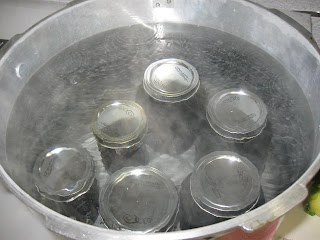 Step 4:  Place sterilized metal lids on jars and screw metal bands on securely.  Process in boiling water bath for 5 minutes.  And yes, 5 minutes is honestly plenty...this stuff is basically like jelly or jam in that it's got a HIGH sugar content on it, so it'll be just fine at 5 minutes.  Just be CAREFUL putting this stuff into your canning jars.  Remember, candy chefs refer to boiling sugar as "culinary napalm" for a reason and it's a good one, so this would be a good time to pay attention.

Step 5:  Remove jars from water and let sit on a dishtowel (as seen in the first photo) for 12 to 24 hours.  Check seals.  If some seals didn't take you can reboil the syrup and reprocess with a new lid or just stick them in the fridge to use.

The only person in our house that likes real maple syrup is me, and I can't taste it anymore due to health issues, so I am putting it in place of corn syrup in my homemade recipe to see what will happen. It's rather sacrilegious to do to the real thing, but I hate to waste it. We don't use so much, so I wanted the canning time, thanks. And I like your style of writing.