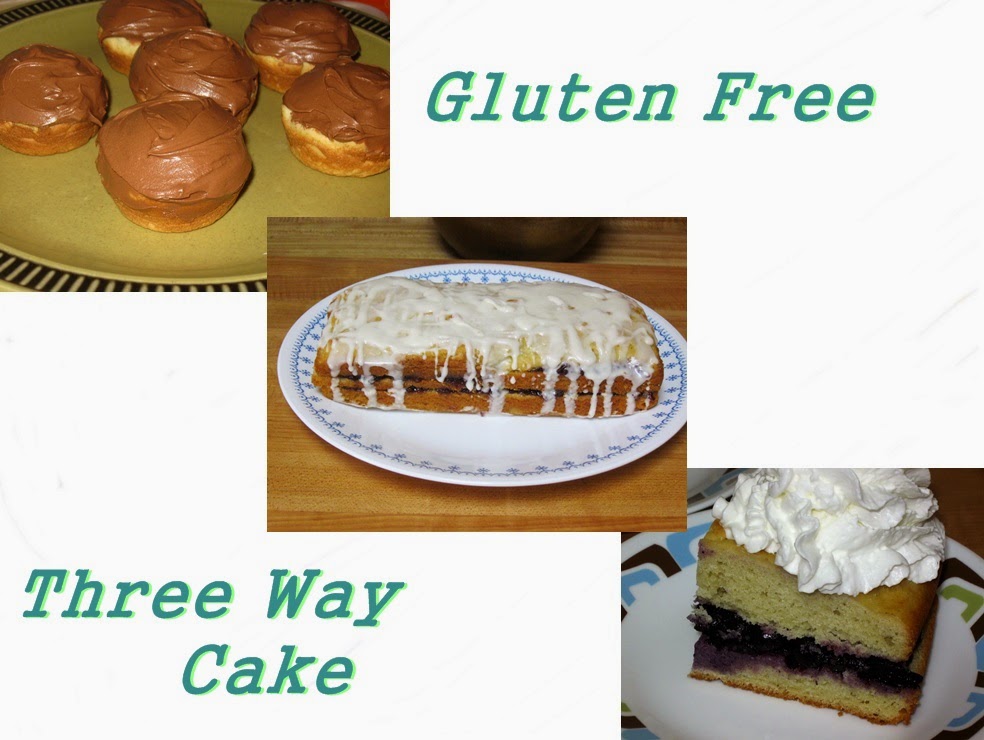 Here's one of those recipes that is just so versatile, I'm planning so many different ways to prepare it...well it's kind of pathetic.

I found, while researching, that a typical thing to do during the wars years was to split a recipe up when making something like cake to do multiple desserts at one time.  This also eliminated the fear of wasting something should you not eat it all in one sitting.

A typical trick was to split a cake recipe in half and make a smaller cake (like an eight inch round cake) and then use the other half to make cup cakes.  That way you had two desserts for the week instead of one.

And that's how I stumbled on the concept of the three way cake.  It is literally one bunch of batter that you then split into three parts to make three different desserts.  All at once!  Or you can be boring and make a three layer cake with the batter, but where's the fun in that?

So, what follows is the base recipe and what I did with it to work it three different ways.  A couple of notes.  If you choose to follow what I did?  Keep in mind to only fill up your cupcake tins about 1/2 the way up the sides.  This is because in ye olden days the portion sizes were smaller.  This will keep you from having a REALLY small third cake when you are done.

2.  Grease three eight inch round cake pans (or, as in this case, six cupcake tins, 1 7" loaf pan and 1 1/2 quart square baking dish...or you could use another loaf pan if you don't have that).  Stir together the flours, starch, xanthum gum, baking powder and salt.

3.  Beat the shortening in a stand mixer on high speed until fluffy.  Gradually beat in sugar.  Add the eggs one at a time, beating well after each addition.

4.  Add the dry ingredients, milk and vanilla and beat on medium speed (scraping bowl often) until batter is smooth.


5.  Divide batter into prepared pans (I went down the line, cupcakes, loaf pan and then 1 1/2 quart baking dish).

7.  Let sit in pans about 5 minutes and then remove to tea towels to cool.  Only cut and prepare the cake you are planning on eating that evening and store the other two cakes in your fridge until ready to use for another night (I bet they'd freeze well too).


And now for the fun part!  Some of the variations I did! 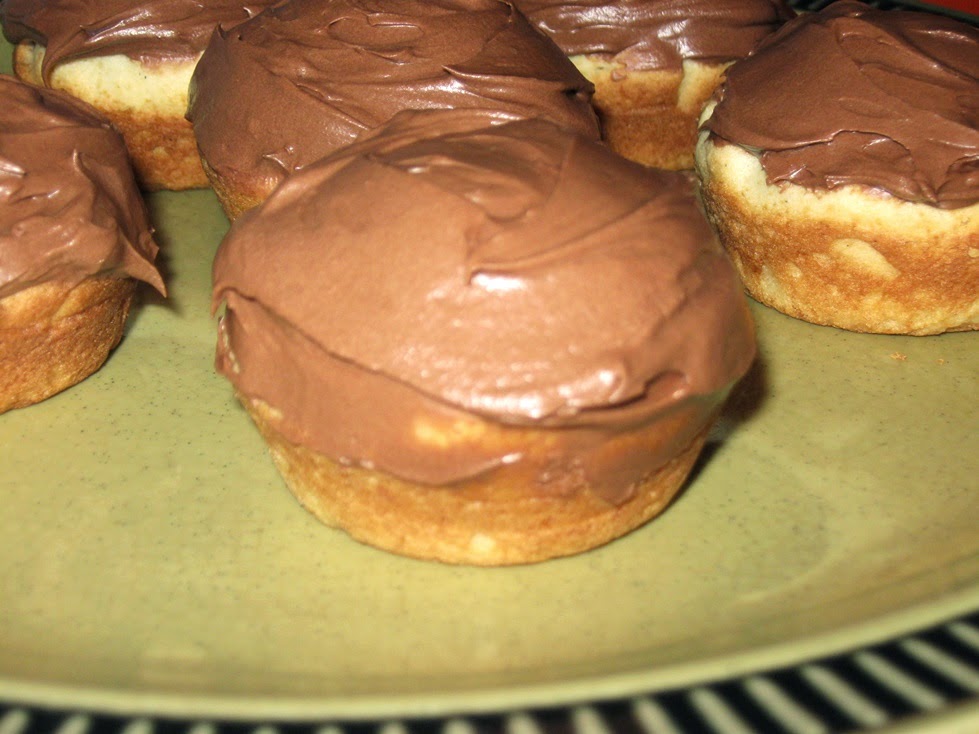 Variation One:  The cupcakes

Okay, this one was easy.  I just took chocolate frosting and put it on top of the cakes.  Take your favorite chocolate frosting recipe and cut it down to about 1/4 of the original and you should have enough to frost your six cupcakes. 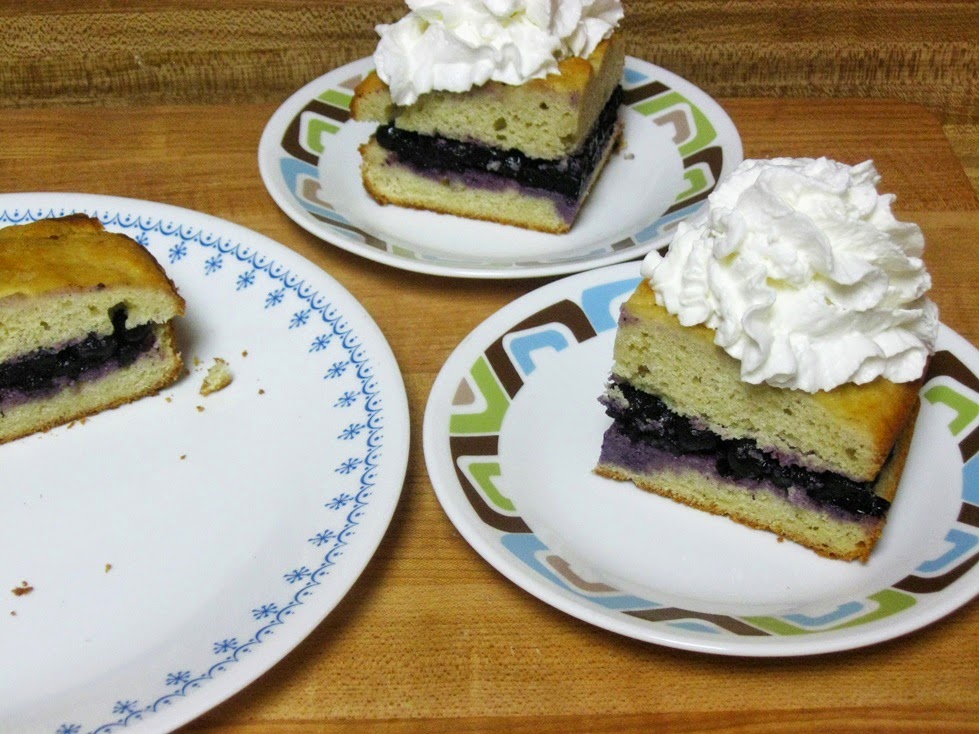 Take 1/2 quart baking dish cake and taking a bread knife, slice it into two layers (it doesn't need to be perfect).  Fill with your favorite canned fruit, drained WELL (I used spirited blueberries from my pantry).  Top with whipped coconut cream or whipped cream and you are good to go! 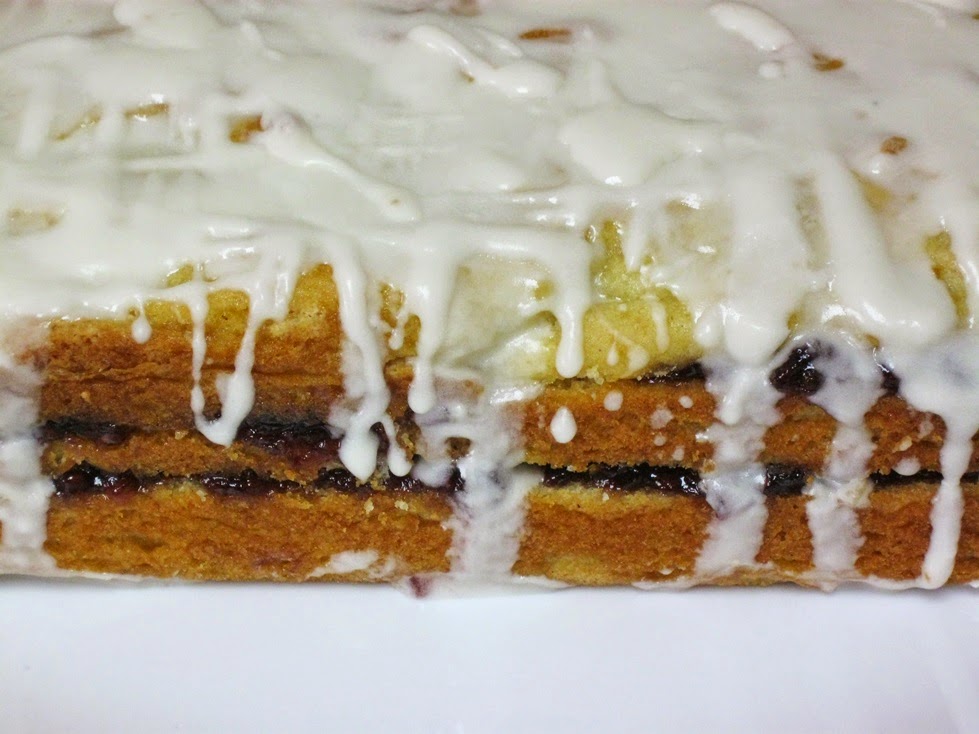 This was by far my family's favorite way for this to be prepared.  During WWII, jam and jelly became big staples in desserts because they were on ration, so a lot of families started making their own jelly and jam when they could with their sugar ration (they'd get extra during the summer months to use specifically for canning).  So, you ended up with jelly and jam being used to sweeten different desserts.  So, I decided to test that principle here.  And it is yummy!

Slice loaf pan cake into 3 pieces horizontally with a thin bladed bread knife.  Spread jam in between layers (I used home made raspberry preserves from my pantry) and restack cake.

Top with your favorite recipe for vanilla glaze (I used this one that I tweaked to work with our allergies and such).  I cut the glaze recipe down to about 1/4 of an original recipe, seeing as how if you make a full recipe of glaze you'll have a ton left over.

Cut into slices and serve.  This one lasted us about 3 meals worth of desserts as it's pretty filling.  Store leftovers in fridge.


So, one cake recipe saw us through about five days worth of desserts.  I thought that was pretty cool, myself.