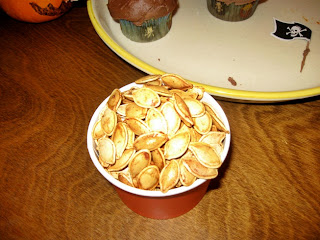 I know this one is sort of late since a lot of people have already gutted their pumpkins and used the pumpkin seeds for different culinary applications, but I thought I'd still share a cool recipe that I've developed over the last few years.  See, the recipe itself is super simple, but it's the METHOD that works best for me.

See, I have always been one of those people who stared at the pile of pumpkin seeds that were left from gutting the Halloween pumpkin with a mix of desire and a doomed sense of soon to come failure.  Every single year I'd try to make roasted pumpkin seeds.  Every year they'd either come out really bland tasting or, worse yet, burned and nasty tasting.

A couple of years ago I went on, what I like to call, "The Pumpkin Seed Crusade".  I tried to think of different ways to roast pumpkin seeds and do it in such a way that I wouldn't burn them to a cinder and I could impart some cool flavors on the roasted pumpkin seeds.  Year before last the pumpkin seeds turned out OKAY, but I ended up mixing them in with a  trail mix application I made later.  Last year they turned out a little better, but I knew there was something missing.

This year I finally got the process to work RIGHT!  So, here you go folks.  An easy way to get flavorful pumpkin seeds and ones that are a lot harder to burn to a cinder :). 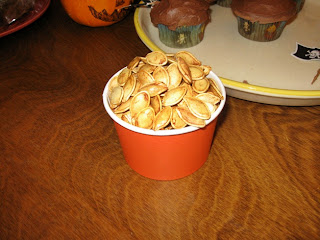 1.  Take your green pumpkin seeds (uncooked that is) and place in a small to medium sized saucepan.  Take apple cider (preferably) or apple juice and pour in with pumpkin seeds.  Bring mixture to a boil.

3.  Make sure your seeds are well drained and then spread onto a parchment lined baking sheet.

4.  Sprinkle with seasonings of choice.  I like to sprinkle them with cinnamon (being pretty liberal with it), Cheyenne pepper (to taste.  I like just a pinch over the seeds), and some pickling salt (it's a finer grain than regular salt, is free of additives, and sticks to popcorn and things like this a lot better than other types of salt).  Mix seeds up with a spatula and make sure all sides of seeds are well seasoned.

5.  Place in 300 degree oven and roast for about 10 minutes.  Take seeds out of oven and stir well with a spatula.  Place back in oven.  Check seeds about once every three to four minutes until residual moisture on the parchment is starting to dry up and nice and done looking.

My seeds took about 20 minutes to get nice and roasted.  The nice part about it, though, is that the apple cider "par cook" gives you a lot of help in the cooking the seeds and flavor department.  Basically, you're putting them in the oven to roast just to dry the seeds out and put a nice crunch on them.

Store in an airtight container.  Will keep for about a week (I'd guess, as they never last that long around here).  For longer storage put in freezer where they'll keep for 3 to 6 months (estimating there).