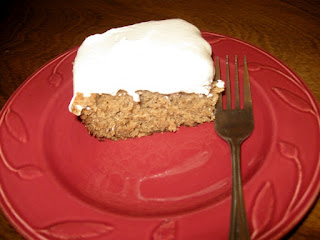 Anyone who grows up in New England must love apples.  My husband doesn't get it, but then again he didn't grow up in New England.  He has fun at my expense every year as I run out to buy apple cider (which isn't as easy to find in Alaska as it is back in New England or in Pennsylvania where I used to live), give a squeal like a little girl when I see Honeycrisp apples on sale and rolls his eyes as I try to figure out how to buy apples in bulk and save them to use throughout the winter to savor that peak of season flavor (luckily my new "pantry" which is in the utility room under our main staircase now actually stays nice and cold, so I'm thinking inside root cellaring might be worth trying in our new house.  So excited :).  So, to say that he doesn't "get" my fall obsession when "it'll just snow in a couple of weeks anyway", makes it hard for him to understand a quest I've had since I moved from New England when I was twelve.  Apple cake.

Every single year when I was a child we'd run to the apple orchards in the fall and pick bags of apples.  And every single year we'd make a cake with some of those apples.  It had apple chunks in it, had spices in it and was so yummy that I, who wasn't particularly a "sweet eater" type of person would eat pieces of the cake and make yum sounds while doing it.  Somewhere in the divorce and subsequent move when I was a young teen a double tragedy occurred in that the recipe for that cake was also lost.  I seem to be the only one of my siblings who then became obsessed to find that recipe again throughout the years, which was sad.   And oh did I search.  And search.  And search.  All to no avail.

So, this year I decided it was time to forgo buying yet ANOTHER New England themed cookbook in the hopes my beloved cake recipe was in there and just plain make up my own recipe.  I also decided to try making an icing that speaks to my New England past.  Maple frosting.  And so, I hit my kitchen with gusto, to recreate a memory from my past.

Unfortunately, for me, the recipe didn't work out as I'd planned.  I decided to use apple sauce to make the gluten free cake stick together better and give it a smoother texture, which it did, but somewhere in my subsequent "bright idea" I sort of forgot that when you mix in a pureed veggie or fruit into a recipe the taste of that fruit or veggie changes.  So, when the cake finally cooled enough to bite into it, I ate a piece, but didn't detect any apple "flavor" to the cake.

But, ohhhhh man, did I ever detect yumminess!  This was, by far, up there with one of the best mess ups I've ever done in my entire life.

Yes, this cake doesn't taste like apples.  But, if you like luscious, moist, supreme spicy deliciousness you will want to make this cake as soon as you read this.  This cake is so moist and yummy you will not even detect, not in your greatest imaginings that it is gluten free.  Yes, it is THAT good!
Anyone who likes spice cake should make this cake.  And if you like for it to taste like apples, peel and dice up 1/2 cup of apples, reduce your apple sauce by 1/4 cup and eat cake.  Lots of it :). 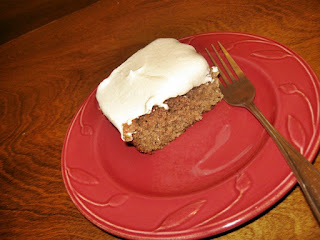 Stir together dry ingredients and then add to wet.  Mix well to combine.

Let sit until cooled.  Serve with maple frosting (recipe follows), ice cream, whipped cream, caramel sauce (look up coconut caramel sauce in Google for a dairy free option on that) or by itself.  Yum!

Beat ingredients together in a medium sized mixing bowl (start out slow or you're counter will get a sugar facial) until icing consistency is reached.  Spread on cooled cake and consume :).