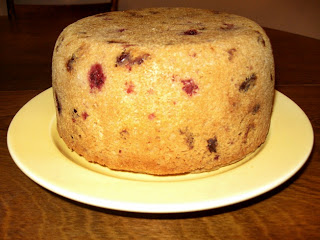 When I first got married I didn't have a lot of what you'd call "culinary experience".  For the most part my siblings and mom were into eating the same four meals in a week and if I strayed from those perimeters I heard about it.  I still remember the time when I made a Japanese inspired dish with a daikon radish and my younger sister glared down at the plate and asked snidely, "Is this supposed to be food?"  Yeah, after that I sort of gave up on trying to make something new and different and just went with what we always ate on the menu during the week.

So, when I got married I was surprised to find out that my husband actually liked my cooking and not only didn't mind me experimenting with recipes, but also encouraged it.  Yes, there were times when disasters resulted from my experiments, but overall I learned a lot.

What does that have to do with steamed pudding?  Well, the first time I ran into it was when I was experimenting with new recipes the first year I was married.

See, I'd gotten a cookbook of primarily desserts from my husband for a Christmas gift and looking through it I found a recipe for a "Chocolate Steamed Pudding".  Thinking that "pudding" meant Jello Pudding consistency, I decided that might be a good thing to make for dessert one night.  When I pulled the stainless steel bowl I was using as mold out of the pan of boiling water and went to serve it  later for dessert I was surprised to not find "pudding" but to find a cake perfectly steamed in its depths.  It wasn't pudding as I knew it, but it was still delicious.

Fast forward about 10 years to when one night last week I was trying to think of something cool to make with Craisins (one of the few dried fruits my son can eat that I don't have to worry about peanut contamination on and one of my favorite fall flavors) and the idea of making a pudding with them came into my head.  Ironically enough, that same night I found an article in my new "Hobby Farm Home" magazine where there was a recipe for Berry Steamed Pudding (November/December issue 2012).  So, I tweaked the recipe around to make it gluten free and to accomodate dried fruit, spooned it into the bowl for my rice cooker (I don't have much for metal bowls anymore around here and didn't want to risk my good ceramic mixing bowls on being boiled for 2+ hours), put the alluminum foil over the top, poured boiling water around, boiled it for 2 hours and prayed that everything turned out alright in the end (because, well, gluten free baking can get tricky).

And the payoff was good enough that I ate two pieces as soon as they were cool enough to cut off the pudding.  Oh yeah!

This pudding is not only dense and super moist, but the leftovers with the hard sauce spooned over the top are just divine.  I'd definitely suggest refrigerating this after it cools, though, as it being so dense and moist it will probably mold really fast. 
1.  Boil a kettle full of water on your stove top or use an electric kettle to get a nice amount of boiling water.  Find a large saucepan that'll fit a disposable pie pan.  Turn pie pan over and perforate with an awl (or other pointy object) all over.  This is going to be your make shift trivet to keep your mold off the bottom of the pan, which will stop the bottom of the pudding from burning later on.   Place inverted pie pan in bottom of pan and set pan on stove (we'll get to it later).

2.  In a large mixing bowl cream together sugar and butter/buttery spread until fluffy.  Beat in eggs (or your chia/flax eggs) and mix well.  In a separate bowl combine flours, guar or xanthum gum, baking powder and salt and stir with a dry whisk to combine well.  Pour dry ingredients into wet and add milk and mix well.  Fold in berries.  Turn into whatever WELL GREASED (I hit mine with non-stick cooking spray) mold you choose to use (I would recommend a stainless steel mixing bowl or something similar.  I used the 2 quart bowl from my rice cooker) and cover top with aluminum foil (unless you have a proper pudding mold.  If you do that's pretty cool :).

3.  Place your mold into your big pan and place on top of your make shift trivet (I used my 8 quart stock pot for my bigger pan) and then take your kettle and pour boiling water (CAREFULLY!) 1/2 way up the side of your mold (if you don't have enough boiling water just fill up the rest of the way with as hot a tap water as you can get.  You just want it to be nice and hot to avoid the pudding sitting in cold water while it heats up).  Turn heat to high until the water in the pan boils well and then reduce heat to a good simmer and place a tight fitting lid on your pan.

4.  Checking pan occasionally to make sure your water level remains constant, boil for 2 to 2 1/2 hours (if you over boil the pudding time-wise it really doesn't do it any damage so long as your water level remains constant by the way).  Serve warm with New England Style Hard Sauce (recipe follows), whipped cream or just enjoy hunks of it by itself.  Leftovers are superb!


1.  Cream butter in a medium sized mixing bowl and then add in sugar and vanilla and blend thoroughly (I use a whisk for this part so you don't end up with confectioner's sugar all over your kitchen).

I think this stuff tastes best at room temperature and if using coconut oil the room temp thing is a must.  Will keep in fridge up to one week.

Other options:  Use orange or lemon extract (or any fruit based extract really) instead of the vanilla extract for a fruity tasting sauce.  You could also use rum instead of the vanilla extract for a sauce with a kick or rum extract if going for more of a traditional type of taste to the sauce.     Trust me this is one sauce you can have fun with :).