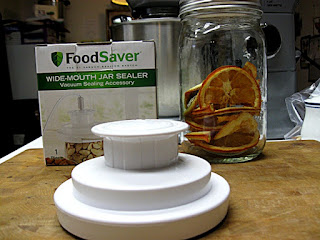 One of the disadvantages of food allergies and sensitivities around here is that I found that my food storage that I'd worked so hard to stock up over the years is that with cross contamination issues it was now COMPLETELY worthless to me.  So, I ended up giving it away.  Not a great situation to be in by any stretch of the imagination.

I canned what I could, but I really wanted to get more dehydrated foods back into my stockpile, but I wasn't sure how to go about it since you can't really CAN dehydrated items.  I mean I could buy some #10 cans from our local LDS cannery and borrow a canner, but do you know how long it takes to dehydrate enough to fill up a #10 can with food?  Well...it takes a while let's put it that way.  And I would still not be sure that the canner was free of wheat and other allergens (LDS are big on wheat as part of your food storage).  And my dehydrator suggested storing dried foods in the fridge or freezer for optimal storage because there weren't any preservatives added to prevent mold growth, which wasn't really what I was looking for.  So, what was a girl who really wanted to start storing dried foods again to do?

In steps the FoodSaver T03-0023-01 Wide-Mouth Jar Sealer.  I found this while looking up food saver bags on Amazon and decided to give it a shot, as if it worked it'd be an awesome addition to my "self sufficiency stockpile of food gadgets" (as I like to call it ;).

So, how does this thing work?  Well, first, don't worry as this isn't a "lid" that you have to buy one per jar or something.  This IS actually a jar sealer that you remove after you vacuum seal the jar and move on.  So, that was an upper to my day.

What you do is this.  You first fill a mason jar with dehydrated foods (you can also use this on wet foods, but be sure to note that since you are NOT heat processing this is NOT a substitute for good old fashioned canning.  Put it in other words don't seal up a thing of tomato sauce and then stick it in your pantry or you are going to be in for BADDDDD news okay?  It can help to extend the life of your items in your fridge though).  Than, I had to learn this after about four tries and THEN reading the directions (because I work on a wide stupidity curve sometimes), make sure the ring to the mason jar is removed and the lid is placed on the jar right.  I actually add an Oxygen Absorber to my jars too just as some added insurance against food spoilage later on, right before I place the lid on the jar.  Then just take the Food Saver Jar Sealer and push it down over the lid and everything until tight.

Then take one end of the tube (I just use the one stuck into the jar sealer lid) and remove THAT not the Jar Sealer itself or it'll remove the mason jar lid with with and wreck your seal (remember it's vacuumed to the lid right now).  A little poof of air will escape, but don't panic that's not the vacuum seal escaping, it's just the seal between the jar and the Jar Sealer.  Remove the jar sealer from the mason jar (which is the most challenging part for me as I'm always worried I'm going to wreck the seal).

And voila!  You should have a perfectly vacuum sealed mason jar perfect for long term dehydrated food storage.

So, overall what is my opinion of this contraption?  I LOVE it!!!  I've been using my dehydrator constantly since I bought it (nothing like realizing you'll never have to throw out bananas again when you can just dry them before they go bad :), so this is just a perfect thing for me to have around.  Sure, my food storage will be in glass instead of metal cans for now, but I don't really care.  It's just nice to know if I want carrots in my soup and realize I don't have carrots in the fridge that I'll be able to reach for a can of dehydrated ones instead.

So, yeah, if you want to have a stockpile of dehydrated foods I'd get me a Food Saver (if you don't already own one...I honestly don't know many people who DON'T have one), a jar sealer and some oxy absorbers and you'll be ready to rock!

Oh and as an aside I LOVE that you can seal the jars again and again too.  In the picture is a jar of dehydrated oranges that I'm slowly working on filling and I just seal up the jar in between dryings so that the food stays fresher.  Very cool stuff!