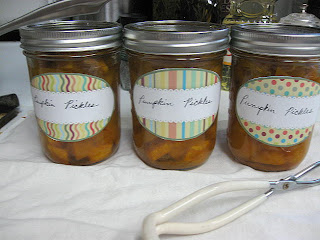 When I ended up with two extra pie pumpkins due to school projects with the kids, I honestly didn't know what I wanted to do with them.  I already had a good portion of pumpkin puree in the freezer from pumpkins I'd bought earlier (before the surprise pumpkins had to be purchased) and I had found a good deal on pumpkin puree at Three Bears on top of it and had stocked up.  So, I cleaned them, vaseline-d them (helps to stop spoilage) and kept thinking on what to do with them that wasn't just baking and smashing them into pulp.

And then one day while perusing my copy of The Ball Complete Book of Home Preserving I struck paydirt.

Now mind you, I grew up on things like Watermelon Rind Pickles, so the idea of pumpkin pickles didn't seem so odd to me.  Rest assured these things come out looking pretty orange and look pretty cool in the jar and they DO taste like a bread and butter pickle with a sort of pumpkin-y flair to them.  I really liked them :).  So, if you have some pumpkin you are looking to use up, this is a great recipe to try!  And if you are looking for unique home made gifts to give this holiday season, I'd think this would be one no one would see coming ;).

I took the original recipe (since it called for 24 whopping CUPS of cut up pumpkin) and halved the brine ingredients...the recipe didn't really break down into 1/4th well, so it was easier to make extra brine and have some left over than to end up with too little you know?

Sweet Pumpkin Pickles (adapted from Ball Complete Book of Home Preserving)
1. Prepare canner, lids and jars (if you're going to store these in the fridge to use immediately don't worry about this part)

2. Tie cinnamon stick half, allspice and cloves in a square of cheesecloth, creating a spice bag.  Set aside (or do like I did and just make the brine with it all floating around on the surface and then take a slotted spoon and just fish the spices before you can everything...I couldn't find my cheesecloth at that moment :).

3.  In a large sauce stainless steel (or non reactive!) saucepan, combine lemon zest, lemon juice, sugar, vinegar and spices.  Bring to a boil over medium-high heat, stirring occasionally.  Cover, reduce heat and boil gently for 10 minutes.  Add pumpkin, return to a boil and cook for 3 minutes to heat the pumpkin through.  Discard spices.

4.  Pack hot pumpkin into jar (I use a slotted spoon and added the pumpkin to the jars WITH a canning funnel to keep the rim of the jar clean) within a generous 1/2 inch to the top of the jar.  Ladle hot syrup into jars to cover pumpkin to a generous 1/2 inch headspace.  Remove air bubbles (a wooden spoon handle works slick for this.  Just push it down around the perimeter of the jar to get all the air bubbles out that you can find) and adjust headspace, if necessary, by adding more hot syrup.  Wipe rim of jar to make sure you don't have any particles on the rim.  Center lid on jar.  Screw band down until resistance is met, then increase to fingertip-tight (remember no matter how tight you get your band, the band is ONLY there to hold the lid onto the jar.  The cooling of the contents of the jar create the vacuum seal, so tightening for all you are worth isn't going to do anything).

5.  Place jars in canner, ensuring they are completely covered by water (2 inches at least is recommended).  Bring to a boil and process for 20 minutes.  Turn off heat and wait 5 minutes, then remove jars, cool and store (I just boil the water in the canner while I'm prepping everything else and it's usually CLOSE to boiling when the jars are done.  I then just put the jars in the near boiling water, wait for the water to come to a good boil and then set my timer according to the recipe.  Remember...over processing not going to do any harm.  Under processing?  Could lead to a lot of not good things).