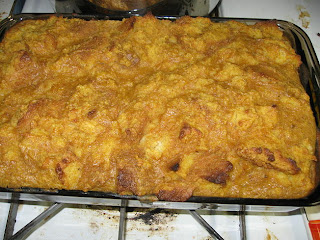 So, one of the things readers wanted to see out of the new blog were recipes that would help you stay warm  when the weather turned cold.  I can so get into that thought :).  So, here you go on that first installment.

I have a confession to make.  I am not a big fan of winter (liked it a lot better when I didn't have to drive in it to tell the truth), but I've always been nuts for fall.  The leaves changing color.  The crispness to the air.  The holidays kicking off with Halloween.  All of it.

Growing up in New England there were two flavors that just screamed fall to me.  One was apples...being in New England, if you hated apples I think that something went wonky with your genetic structure *laugh*.   Heck I'm still kicking myself that I'm not checking the stores every time I go for my one "indulgent" purchase of a half gallon of apple cider (I have plans for it other than spiced and hot this year though ;).  The other flavor that shouts, "Fall is here" to me, to this day is pumpkin.

I've always liked the taste of pumpkin, but pumpkin pie has always been too rich for me.  It's like that once in a year pie that I'd eat one piece of and LOVE the one piece, but then I'd be good for the rest of the year.

This year with the dietary changes we've been going through, I just REALLY needed to get enthusiastic about cooking and canning because if I didn't I'd seriously go wonky.  So, I decided to try and find new and different ways to use pumpkin to "celebrate fall" with more than just that one lowly piece of pie at Thanksgiving.

And first time out of the gate I hit pay dirt!  This recipe combines two of my favorite things.  Bread pudding and pumpkin!  And the best part, for me, is that it tastes like pumpkin pie, but without all the heaviness that the pumpkin pie has.  The texture is superb, the taste is sublime and the whipped cream made with agave...well that might last to go on top of the pumpkin bread pudding, but we shall see ;).

Butter an 11x7-inch baking dish (yeah an 11x7 pan...who even OWNS one of those? If you don't have one, I'd go with a nice deep casserole dish. Worse comes to worse just throw out what little bit of custard you'd have left after soaking your bread :). Heat oven to 350°.

In a bowl, cover the torn bread with the half-and-half; set aside.

Pour mixture into the prepared baking dish. Sprinkle top with cinnamon-sugar, if desired. Bake for 45 to 60 minutes, or until set.
Posted by Erika, "The Make Do Homemaker" at 9:05 PM